Across every spectrum of life, people are experiencing technology-driven transitions that are pushing aside standards of the past.  Innovations in fields as diverse as telecommunications, nanotechnologies, quantum computing, space travel systems and artificial intelligence have, and will continue to cause disruption in our lives and lifestyles. “Disruptive technology” is a term that evokes thoughts of amazing advancement in science and engineering, meaning:

“Disruptive technology is an innovation that significantly alters the way that consumers, industries, or businesses operate. A disruptive technology sweeps away the systems or habits it replaces because it has attributes that are recognizably superior."

While disruptive technologies may seem to be advancing like a smooth, even wave, there are certain areas of engineering that remain stuck in the past. One of the best examples is something we see and experience virtually every minute of every day - a technology that was disruptive when it was introduced in the late 1800s, but somehow has remained fundamentally unchanged. I’m referring to the predominant technology we use to produce and distribute power. After 100 years, why do we continue to purchase power from large power-plant utility companies operating on a macro-grid?  This paradigm was established early (1870-1895) in the industrial revolution and most of the planet continues to buy their power from utility companies that use primarily carbon-based fuel sources attached to a huge electrical grid.

Hover Energy is introducing disruptive technology in the renewable energy market – a new wind turbine powered design that will drastically reduce, and in many cases remove, dependence on the grid and its costs.  Imagine wind turbines efficient and small enough to provide sufficient power for the facility on/at which they are placed - turbines that are safe and quiet to operate.  Until now, the choice in wind power has been either onshore or offshore wind farms whose giant turbines cause adverse environmental impacts and noise pollution (not to mention they are predominantly non-recyclable), or roof-mounted “turbines” that can barely power a hair dryer.

Hover has successfully overcome engineering and scalability issues and developed a vertical axis wind turbine (VAWT) that will increase the standard of wind turbine efficiencies by 10-30% over current horizontal axis wind turbines.  Figure 1 below shows a picture of this turbine during testing. 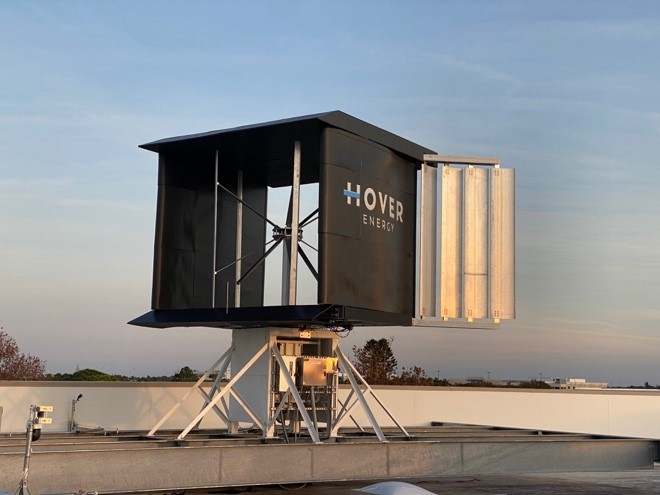 This 12’ x 15’ turbine is the culmination of significant development in aerodynamics, controls, and mechanical engineering. With traditional horizontal axis wind turbines (HAWT), the aerodynamics can improve only to the point of size and aspect ratio of the airfoil. For this reason, these megawatt-class turbines have grown incredibly large to bypass their inefficiencies in order to provide significant energy. Figure 2 portrays the loss of wind energy that escapes between the airfoils of the HAWT. Some of this loss is needed due to the change in airmass velocity providing the turn rate for the propeller-system. However, in any single point in time, the airmass is only used by this style of turbine on the initial impact of air. 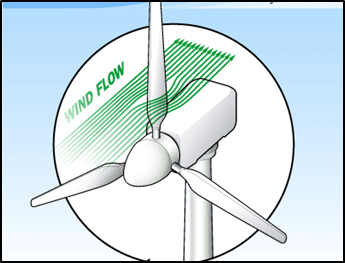 Hover performed years of computational fluid dynamics (CFD) and mechanical effects analysis to arrive at a VAWT solution that maximizes airmass flow into the rotational column of the turbine. The resultant aerodynamic designs of the airfoils, diverters and outflow flaps provide an efficiency increase of airflow within the turbine. Essentially, the Lift/Drag curve of the airfoils is designed to create rotational force across multiple airfoils in rotation in the column. Figure 3 depicts the force loads affecting the rotation of the turbine and increase the working efficiency beyond the single point influence as per the HAWT.

In 1919, the German physicist Albert Betz estimated the theoretical maximum efficiency for a wind turbine. Today, the Betz Limit continues to represent the best that any turbine development could potentially reach. Betz concluded that this value is 59.3%, meaning that, at most, only 59.3% of the kinetic energy from wind can be used to spin the turbine and generate electricity. Betz used assumptions based on scientific understanding of existing wind turbine technology of the time. Indeed, at the turn of the 20th century and even now most wind turbines follow the same principles the Dutch used in the 14th century. A single plane of wind incidence provides easily seen similarity. But the inclusion of friction devices like gearboxes, differential transmission, and rotor systems show remarkable similarity to the basic designs of the far past. Although materials have become more sophisticated, the base principles of wind turbine operation are the same as several hundred years ago. Hover has changed the paradigm of wind energy capture and electricity generation with a credible change to accepted standards. 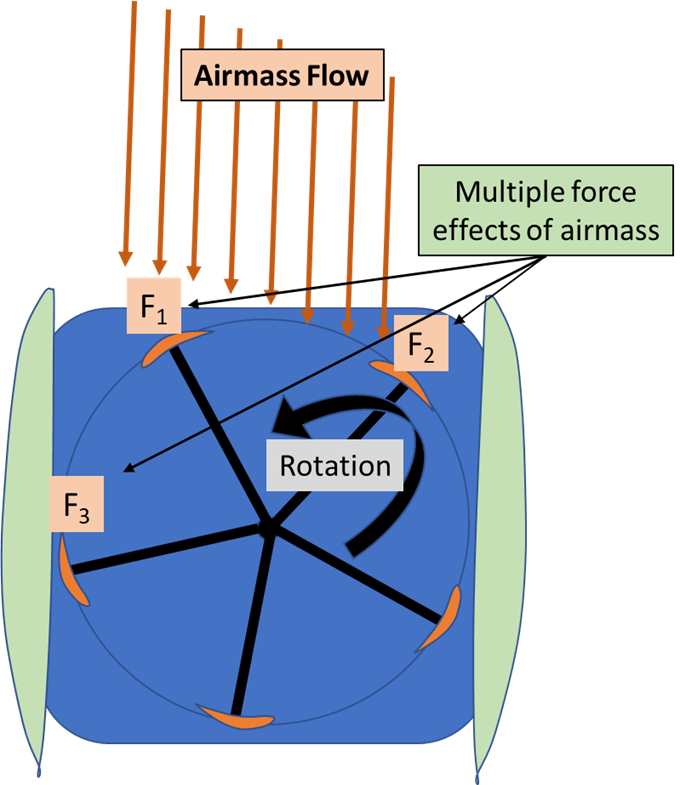 Now, Hover will introduce this highly efficient wind turbine producing 30-40 Kw of power at a size and weight that can be used on commercial rooftops and high rises. This disruptive technology will revolutionize how people procure their energy. When combined with solar power and storage, the opportunity to become grid-free (or to operate a micro-grid) becomes immediately available. When combined with energy storage systems, the paradigm of the macro-grid can finally be broken reliably. Hover continues to develop the future of wind energy systems for the single/micro-grid users. During its R&D phase, Hover Energy also prototyped a frictionless wind turbine; a magnetically levitated VAWT and direct drive generator that operates using Faraday’s Law has already been prototyped at commercial level size.  See www.hoverenergy.com for more information. Betz Law will be challenged with the application of technology that bypasses the need for friction devices!

Ultimately, disruptive technology of real renewable energy that facility owners can provide to oneself is now a reality.